Hear from our new parents

Hear from our new parents

Life as a new parent

Life as a new parent is rewarding and challenging - but you're not alone. We're here to support the whole family and give information and advice when you and your baby return home.

Why not have a read through the birth stories of those who have done their pregnancy with our Maternity team. 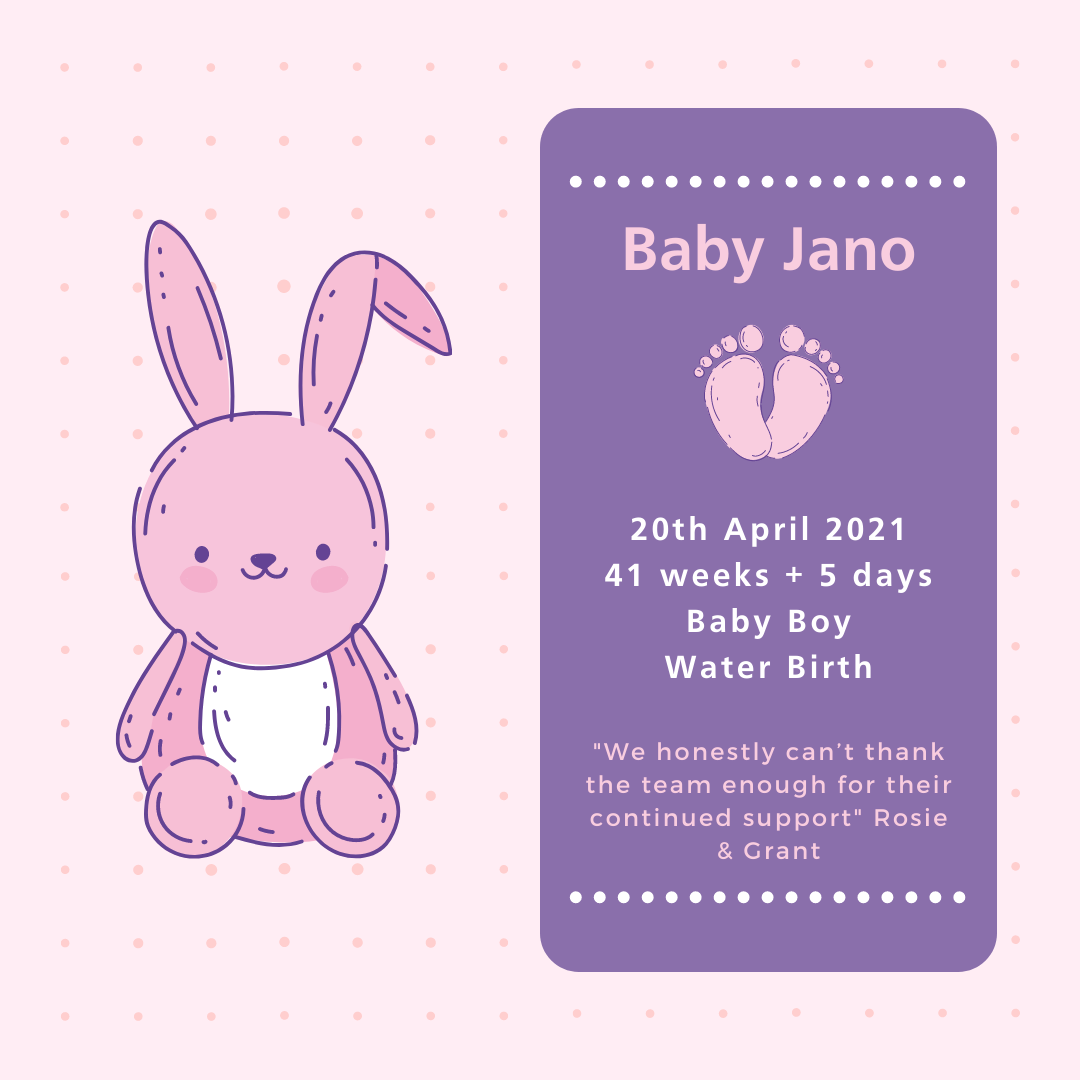 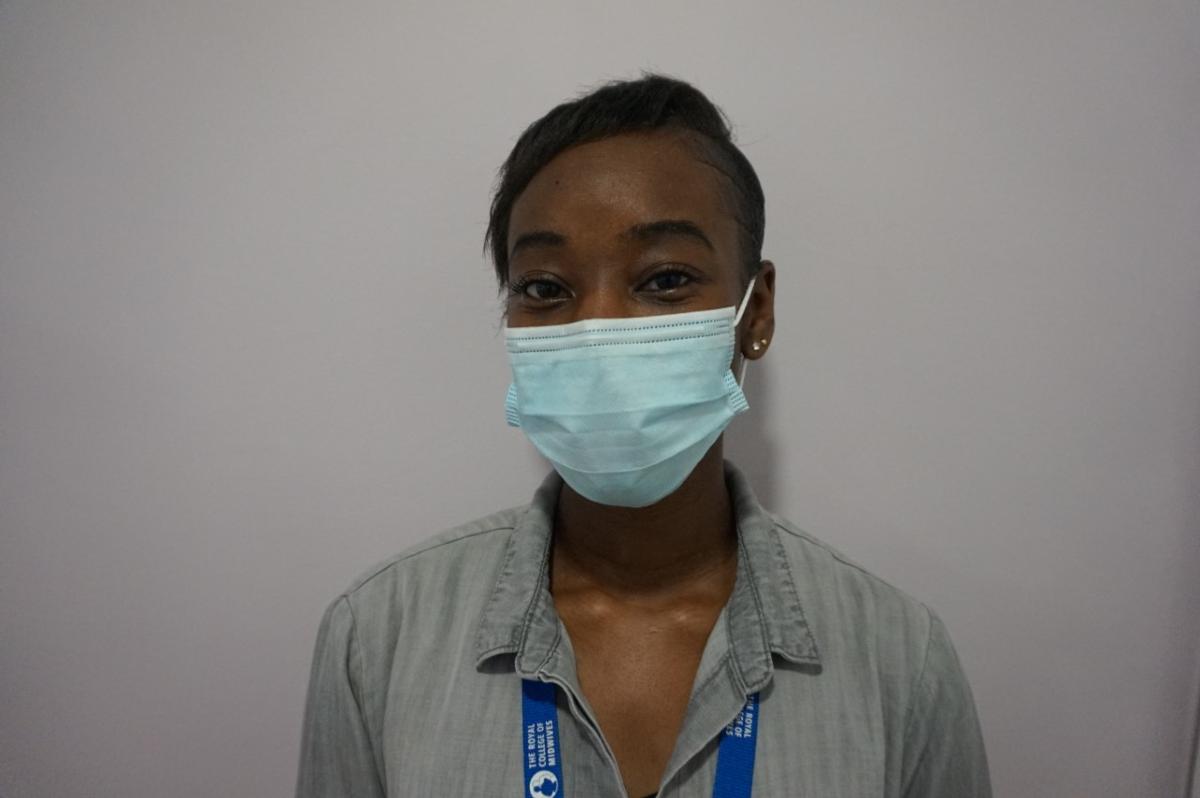 "On the morning of 19 April 2021 Remi (left) came round to check in and give me another sweep, hoping to be 5th time lucky. By 11pm and a long hot bath later we knew this one had worked as contractions were coming every 3 minutes.

Remi returned at 1am (20 April) and by this stage Grant was filling the pool as fast as he could because the contractions were coming thick and fast (we had to turn off the clary sage oil). I had my headphones on trying to stay focused and remember all my hypnobirthing techniques.

By 3:30am Rebecca had arrived to support and I was given the green light to go down stairs and into the pool; which was an instant relief. Unfortunately a bit of my cervix hadn’t dilated but the urges to push were so strong, there was a quick discussion about the possibility of a hospital transfer or back into the pool to deliver baby.

Thankfully Remi and Rebecca guided me back to the pool where baby Jano made his appearance. By 5:30am our healthy beautiful boy had arrived and just moments later our 4 year old daughter Piper was by the pool meeting her baby brother.

We honestly can’t thank the team enough for their continued support even when the odds were leaning towards an induction.

The home birth experience was everything we had hoped for and more." 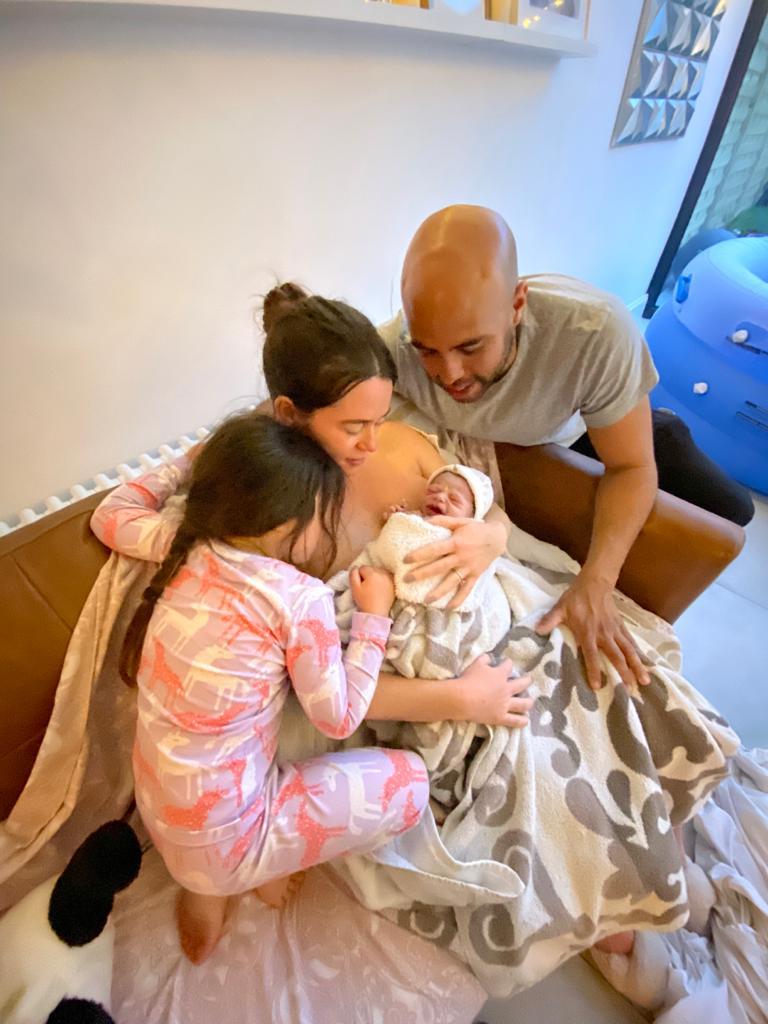 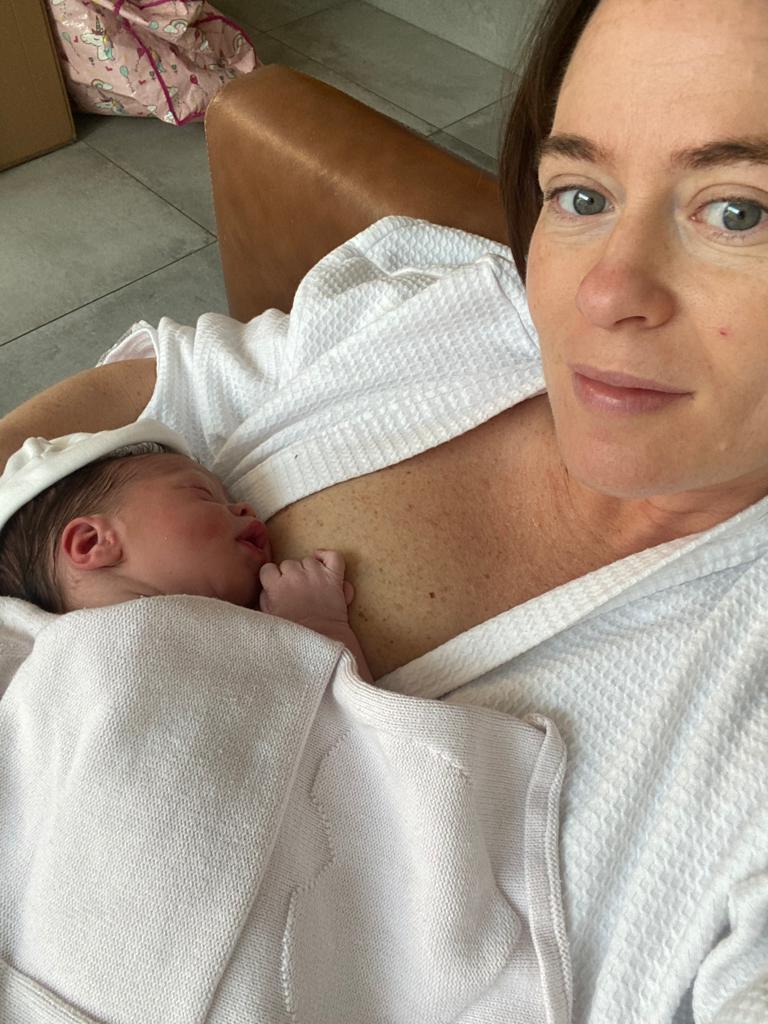 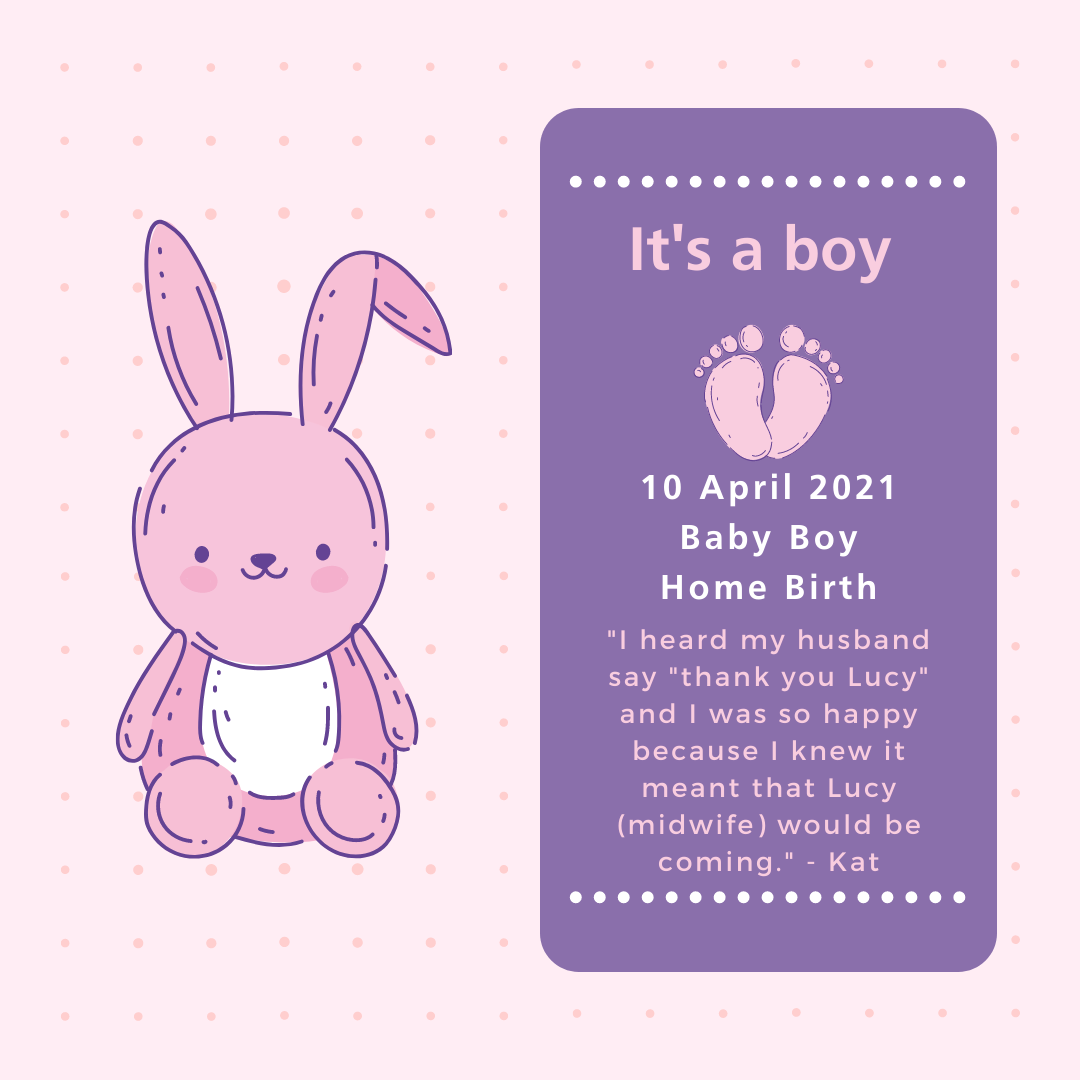 "I woke up early Friday 9th April to period like cramps. I tried not to get ahead of myself but I was excited that this might be the start of labour.

Once I got up and had breakfast I was starting to get mild surges. These continued throughout the morning but still weren't in a regular pattern. By lunchtime the surges had stopped altogether. I was so disappointed! I really thought that it was going to be the day! I ate some chocolate and felt sorry for myself.

By 9.30pm I was finding the surges more difficult to manage so my husband called the home birth team while I was doing my best to breathe through each surge.

I heard my husband say "thank you Lucy" and I was so happy because I knew it meant that Lucy (my named midwife) would be coming. 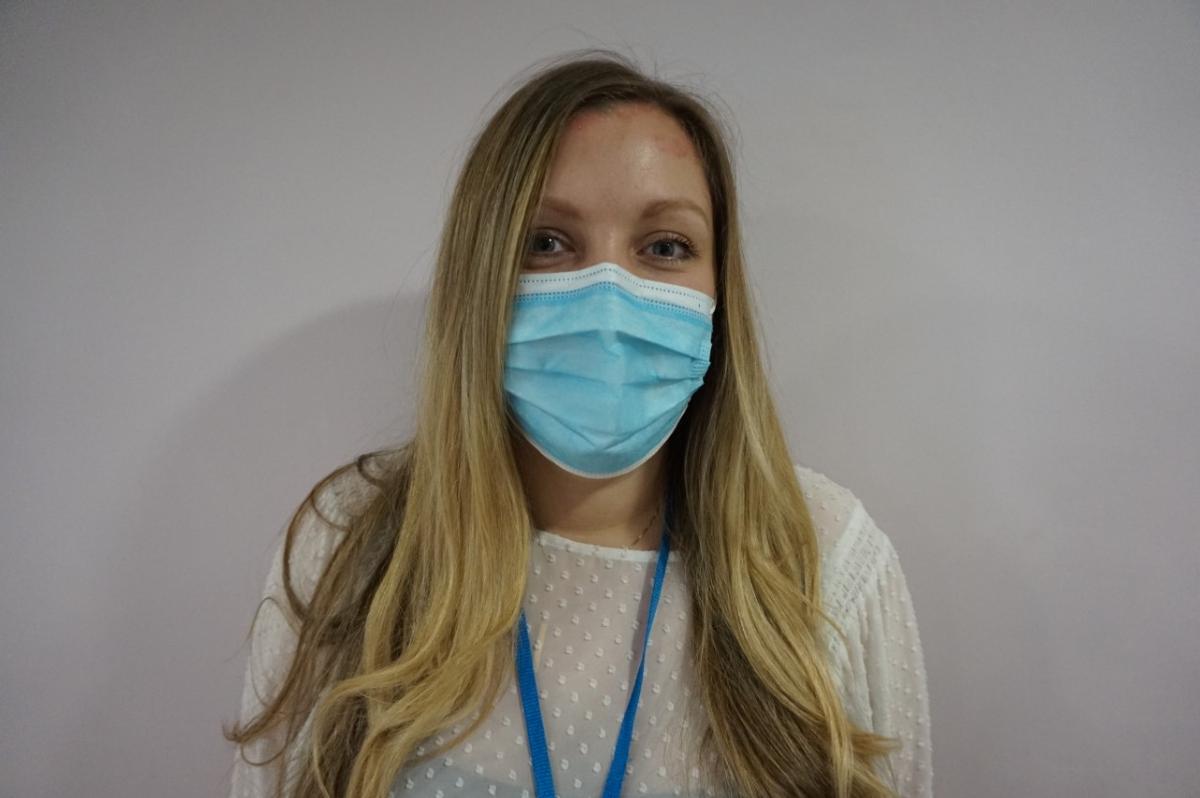 Lucy (left) arrived about 10.40pm and observed and spoke to me while trying to access how far along I was. I then asked for gas and air which Lucy administered to me. She then wanted to do a vaginal examination. I was in 2 minds about whether to accept it as I was nervous she was going to tell me I wasn't very dilated. To my surprise (and hers I think) I was 7cm. At that point I decided to get in the pool (about 11.30pm) and Lucy called the second midwife to come. Andrea turned up a short time later while I was in the pool. Unlike during my first birth I didn't feel the same relief from the pool and felt as though my surges were slowing down so I decided to get out. 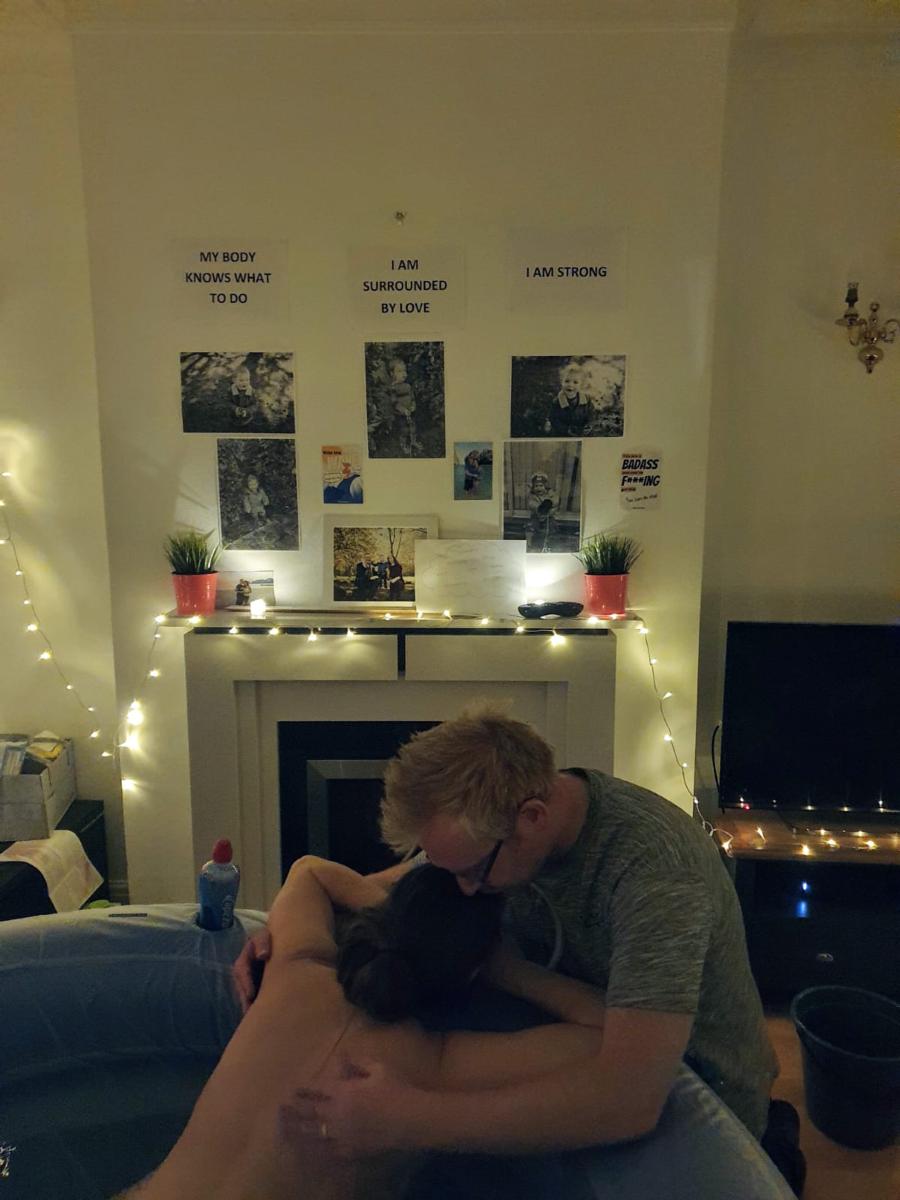 suggested we might like to put some music on. This turned out to be perfect solution. The first song on my playlist was the song I walked down the aisle to on our wedding day. My husband and I danced to the music together and reminisced about our wedding day. It was the perfect combination to get the oxytocin flowing and get me back in the zone.

A few songs later and I felt the urge to "bear down." I knelt down on the floor leaning over the sofa whilst trying to calmly breathe baby out (as I'd learned in hypnobirthing). It was the strangest feeling when I could feel baby's head starting to come down and then popping back up again. This happened a couple of times before I felt another big surge and babies head (and a hand) were out. Baby then started full on crying whilst his head was out but the rest of his body wasn't. It was the most surreal feeling!

Then another couple of surges and the rest of his body came out. Lucy caught him and brought him up to my chest for skin to skin. I remember saying "I did it!" It was the most incredible feeling knowing that I had just birthed our baby at home. Our beautiful baby boy was born at 1.54am on Saturday 10th April while our first born son slept through the entire thing (just as I'd hoped he would)!

Unfortunately due to baby's hand sneaking out with his head I had a tear which needed stitches and also some bloodloss. Neither of those things take away from how positive my birthexperience was though and how amazing it was to have a homebirth.

I highly recommend having a homebirth and especially with the CROCUS team. The prenatal, during birth and postnatal care has been exceptional."